Community organizer Carlos Rosa formally announced his candidacy for alderman of Chicago's 35th Ward on Saturday at a small rally in Fireman’s Park.

“We’ve seen the story of Chicago that is broken and needs to focus on putting our neighborhoods first,” Rosa told a group of a few dozen supporters. “But we’ve also seen the story of teachers fighting for good schools, of people fighting to stay in their homes, and of workers getting arrested for a $15 an hour minimum wage. Today we build upon that.”

Rosa, 25, has worked as a community organizer with the Illinois Coalition for Immigrant and Refugee Rights (ICIRR) and congressional caseworker for Representative Luis Gutierrez (D-IL). Rosa also says he is the first openly gay Latino to run for a Chicago aldermanic seat.

“In the 35th Ward, we’ll have a government that is truly responsive to the people,” Rosa told his supporters. 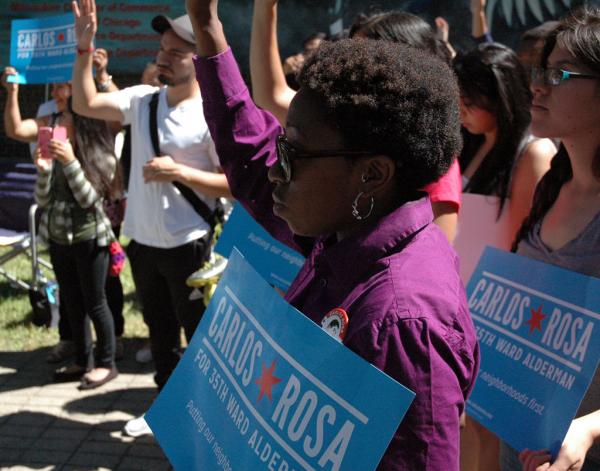 Rosa is running against incumbent Rey Colon, who has come under criticism for zoning decisions in the 35th Ward. According to the Chicago Tribune, Colon sponsored a large zoning change for 30 condos in 2006 after a panel made the recommendation. The panel included the developer, who was also a major contributor to Colon’s electoral campaign. Rosa said the cozy relationship some aldermen have with developers is one of several problems that give people in Chicago neighborhoods less of a voice.

“Here in the 35th Ward we have an an alderman who has stood with developers as they evict families from their homes,” said Rosa.

Rosa was joined by former candidate for the Illinois House of Representatives Rudy Lozano Jr., who was narrowly defeated in 2012 by current 21st District Representative Silvana Tabares. Lozano said he’s supporting Rosa because he will “stand for progress, independence and this community.” He pointed to Rosa’s support of a participatory budget for the 35th Ward as one way residents of the community would have more control over issues in their community.

This past cycle, three Chicago wards used the system, which allows residents to brainstorm uses for and vote on the way discretionary spending will be used.

“Neighborhoods and neighbors get to decide what will be built in the neighborhood and how zoning will change,” said Rosa. The $1.3 million an alderman disperses every year will be turned over the ward residents.”

That process, Rosa said, is one way to give control back to residents of Chicago’s neighborhoods and keep out special interests that benefit a small few on the city council.

[Read the article on Progress Illinois]