Carlos Ramirez-Rosa has said that, if he's elected to represent the city's 35th Ward, he would be an "organizing alderman."

Ramirez-Rosa, who would be the city's first openly gay Latino candidate to run for alderman, said, "I am tired of the direction our city is going in. I see our public dollars handed out to private pockets while our potholes aren't being fixed and our schools are neglected. I also see the need for elected officials who are accountable to the community, and that are working closely and building relationships with community and advocacy groups." 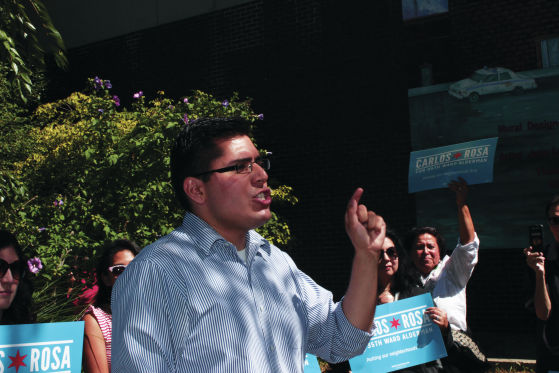 He is challenging incumbent Rey Colon to represent the ward, which is comprised of areas in Logan Square, Avondale, Irving Park, Albany Park and Hermosa.

Ramirez-Rosa, who officially announced his candidacy Sept. 6, is a community organizer is currently a deportation defense organizer with the Illinois Coalition for Immigrant and Refugee Rights. He also worked as a congressional aide in the office of U.S. Rep. Luis Gutierrez.

Colon has not taken a proactive stance in making sure constituent services have been widely available, nor in responsibly developing resources throughout the ward, he said.

"Folks feel [Colon's] office is not responsive to the needs of the community, and he has completely sold out to developers," Ramirez-Rosa noted. "When he was elected as a 'progressive' candidate, he pledged to turn over zoning and development decisions over to the community. Shortly thereafter, he reneged on that promise. The community has seen families evicted from their homes, and it's seen developments it didn't want come up."

In July, Colon was pulled over on the Eisenhower Expressway and arrested for driving under the influence.

"As elected officials, we're held to a higher standard, and that's something that should concern residents," Ramirez-Rosa said. "But I would be running even if that hadn't happened. I'm more concerned about how decisions are being made in our community—decisions that are not in the best interest of the people in my ward—and the way services have been mismanaged. I will not sit back and just let things happen in the community. I'm going to get out and speak with my neighbors."

He emphasized the importance of having these conversations be about development, so residents will have a larger say in what does and does not get built.

"I'm not going to be spending all my time at City Hall cutting deals," Ramirez-Rosa added. "I'm going to spend time canvassing and knocking on doors, and tell residents that they have the ability to decide how to spend the ward infrastructure funds, and the ability to decide what zoning and development decisions are going to be made. That means they have to step up, be present and make their voices heard."

He hopes that those discussions will eventually grow into a model of community engagement that can be used across the city. "We're engaging leaders in every single precinct that are then talking to their neighbors and are then determining policy in the neighborhood," he said. "I'm going to present a vision and ask, is this the vision you agree with? If the leaders I'm working with say the residents that they're engaged with say that that's not what they want to see, then I have to take a step back."

In June, barriers were erected beneath a highway overpass in the ward, in order to make the space uninhabitable for homeless residents. Colon, for his part, said that the operation did not start at his behest.

"We spent tens of thousands of dollars on creating an inhospitable area, for folks without a home, and creating a public safety risk, because now you have that tunnel effect that's there," Ramirez-Rosa said. "That money would have been better spent uplifting the people out of poverty—not a handout but a hand-up, and that's something as alderman I would strive to do: creating an equality of opportunity.

As such, he supports a $15-an-hour minimum wage. "Currently we have working poor. If you're working a full day, you should be able to provide for your family and pay the rent," he said, emphasizing that he'd also work to bring in small businesses that paid living wages to community members.

"I grew up at the intersection of 'Latino' and 'gay,' and that's informed my view of the world," Ramirez-Rosa added. "In many ways that's why I am a progressive. I can't deny that there are things that are fundamentally wrong with our society and our laws, and the way that our economy is structured. … LGBTQ issues are more than marriage equality. There are poor LGBTQ people and there are undocumented LGBTQ people. As a member of that community, I want to make sure that everyone is included in that struggle and that no one is left out. That includes queer folks and trans folks—everyone who falls under our umbrella."

Calling upon his slogan, "Putting the neighborhood first," Ramirez-Rosa asserted stances in his campaign declaration on issues that he said directly affect individuals within the 35th Ward.

"I'm going to tell you something revolutionary today," he said. "Something that's going to put a bull's-eye on my back and that's going to get people in city hall very angry: Chicago belongs to the people!"

At 25, Ramirez-Rosa said he is running for alderman to "invest in our public schools and city services, raise the minimum wage and keeping housing affordable, and strengthen democracy and fight corruption." The latter is a call to put residents in charge of local zoning and budgetary decisions, to fight to institution of corporate handouts for schools, fight deportations of immigrants, and issues of plowing and pothole repairs.

After paying homage to his activist forefathers, Ramirez-Rosa acknowledged, "I have been a beneficiary of movements. I'm standing here today as a Latino that can run for alderman because people have fought." Ramirez-Rosa is very aware and connected to those activist roots and seeks to build off that platform.

The gathering had a community and familial atmosphere. Ramirez-Rosa's sister introduced him, followed by the aldermanic candidate encouraging the crowd to come closer before delivering his campaign speech. Ramirez-Rosa then invited his grandmother to conclude the event with a closing prayer given in Spanish.

Ramirez-Rosa said he has worked to stop school closings, expand access to education, and create equal opportunity for women, immigrants, the LGBT community and working people. He proclaimed his dedication to helping the "everyman" of the 35th Ward and actively encouraged a dialogue between himself and community members.